My cart Cart is empty
Cart is empty
View cart
Checkout
Home/Browse by Author/Jones, Michael/Cardinal Krol and the Cultural Revolution 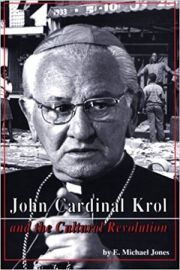 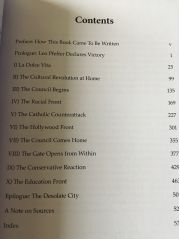 Written by by E. Michael Jones. Those who want to understand the culture of war that has gripped American society since the 1960s will much appreciate John Cardinal Krol and the Cultural Revolution. E. Michael Jones gives a riveting account of how Cardinal Krol confronted the challenges from within the Catholic Church and from those outside the Church. In particular, the confrontation between Catholicism and secular humanism makes for fascinating reading. E. Michael Jones solidifies his position as one of the leading students of American culture.

"an account of the revolution in American mores during the 1960s and early 1970s, and of the part played in that struggle by the bishops and bureaucracy of the Catholic Church ... drawn from massive and apparently uncensored documentation made available by the cardinal. ... illuminating and outrageous history ... . Not that the cardinal emerges unscathed, which makes his decision to open his archives still more credible."

"no mere list, no abstraction, no tired repetition of cultural revolution bromides. It is a gutsy, juicy, name-calling, finger-pointing, and superbly documented panoramic of the last three decades ... astonishingly interesting, virtually a thriller, a suspenseful face-off of good guys and bad guys, with a lot of confused in-betweeners stumbling around, generally making things worse for the good guys."

"Cardinal Krol gave Jones access to his papers, so far the only person to receive such permision, and that in itself makes this book valuable. ... The coincidence of the Second Vatican Council and the rise of the 'counterculture' has often been noticed, and Jones interweaves the two, alternating Krol's role in Rome as a council father and his handling of unprecedented problems in his archdiocese. The contrast is enlightening, among other things showing how ideas discussed in the abstract in Rome were working themselves out in the American situation. ... Jones treats almost everyone in the book sympathetically. ... Jones's provocative thesis should be taken into account by everyone interested in the postconciliar American Church."

" ... one compulsively flips the pages in search of another really good part. ... questions are raised that deserve careful exploration by scholars who may be strongly opposed to Jones' unvarnished partisanship. Regrettably, these questions likely will not be taken up, thereby reinforcing Jones' argument that liberals refuse to face unpleasant truths. ... although Jones obviously wants to be kind to the Cardinal, Krol comes across as an embattled ecclesiastical CEO who, especially on matters theological and intellectual, was in way over his head. ... Equally intriguing is the role of Father Theodore Hesburgh, longtime president of Notre Dame, who, according to Jones, was actively collaborating with the Rockefeller Foundation in undermining church authority, and was declaring Catholic higher education to be independent of church control at the same time that he was increasingly subservient to the control exercised by secular foundations. ... Jones produces enough evidence (also from the files of those on the Rockefeller and Planned Parenthood side) to warrant a detailed response from people more sympathetic to what Father Hesburgh was up to. ... an important book. Again and again, one wants to hear the other side of the story, the alternative and more benign interpretation. But that task is not in the portfolio of E. Michael Jones. He is the prosecutor. ... he has made a case very damaging to persons and institutions responsible for much that has happened in American Catholicism over the last thirty years."

"... extraordinary importance. ... At least with respect to two issues in which I was deeply involved - government family planning and freedom of parental choice in education - I can testify to Jones's accuracy in describing what proved to be fateful developments. ... I deem it a blessing that Jones was granted full access to the Krol files so that the story of those events could at last be brought to light. ... Jones is 'must' reading."

"Dr. E. Michael Jones is a thinker of importance, and this is a major work by him, a work of importance to non-Catholics as well as Catholics because it deals with a cultural crisis affecting us all. ... Dr. Jones will receive little gratitude from his own church for calling attention to its failures. The liberals will detest his truth-telling, and the conservatives are too often involved in nonsense to care ... . All the same, Dr. Jones has written a work which is telling, and it will wake up those who are still living."

"Jones explains not only the methods but the motivations of our country's revolutionaries."