HomeAudio and VideoConference TalksThe Catholic Challenge for the 21st Century: Turning the World Upside Down MP3
368 of 551 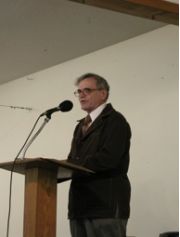 Title: The Catholic Challenge for the 21st Century: Turning the World Upside Down

As a biweekly columnist for fifteen years with the daily Manchester Union Leader, a contributor to the Wanderer, a Catholic weekly, to The New American, and to the website LewRockwell.com, and to other periodicals, Jack Kenney knows a thing or two about how the media can "turn the world upside down" and invert the proper order of things. After giving his audience a barrel of laughs, Mr. Kenney reintroduced his topic with a title somewhat altered from the original, but saying the same thing in more colorful language. "I am supposed to talk," he began, "about the perfidious and mendacious media and how they lead innocent minds to perdition." Having laid down the charge, our speaker went on to demonstrate with examples the facts of the matter in clear, logical, categorical, and unimpeachable propositions, propositions needing no minor premise for the reaching of conclusions that were boldly obvious. He drove home the point that with the never-ending daily sequence of filtered television news clips, morning, noon, evening, and night time, the mind of the viewer is kept in such a state of disoriented flux that he can no longer function reflectively. He is reduced to parroting what the man on the screen tells him about reality. Disorientation. One minute it might be something serious coming from the pope, the next it's Paris Hilton. Football star Michael Vick's cruelty to dogs becomes more abhorrent than the dismemberment of unborn babies by some "respectable" abortionist, addressed as "Doctor," and living placidly among pro-choice suburbanites. Kenney then proceeds to demonstrate how various avenues of the media, especially talk radio, dictate Mid-East foreign policy with a hawkish gusto that knows no shame. We had better remove the beam in our own eye, he argues, before pointing the self-righteous finger: Hiroshima, Nagasaki, Tokyo, and Dresden, to name a few of our own strikes that blew up innocent civilians. Anecdotes galore, this is a reality talk that will entertain your heart just as much as it will inform your mind.