HomeDoctrinePatrologyOn the Apostolic Preaching
2 of 5 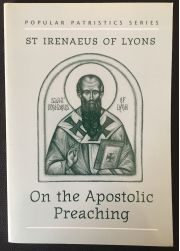 The Demonstration of the apostolic preaching, newly translated here from the ancient Armenian version, presents the same vision with exceptional clarity and simplicity. Written at the end of the second century, it outlines Christian teaching in a non-polemical, non-apologetic manner. The second century was an age not unlike our own: drawing upon various elements from a plethora of religions, the Gnostics conjured up their own diverse gods. In response to this, Irenaeus exhorts his readers to hold fast to Scripture, and simply see what is.