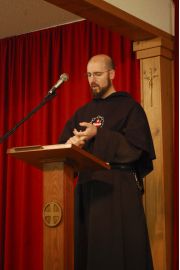 After introducing the speakers and their talk titles the opening remarks of Brother André turned toward the current event, the Synod in Rome “On the Family,” which was winding up as the conference began. Brother briefly addressed the scandalous abuse of what the liberals were calling the “penitential path” in the name of “mercy,” promoting Holy Communion for divorced and remarried Catholics who felt alienated. The Church’s teaching on three sacraments was under assault, he said: Holy Matrimony, Penance, and Holy Communion. Cited in support of the perennial teaching of the Church were Vatican I, the Syllabus of Errors of Blessed Pius IX, and the condemnation of a false development (i.e, evolution) of doctrine issued by Saint Pius X. He ended on the theme of the conference as a solution to the Church’s present ills, Total Consecration to Mary.