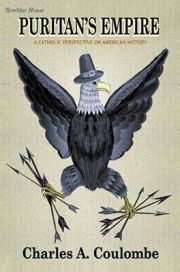 A Catholic Perspective on American History

History is the key to understanding men — whether as nations, families, or individuals. For Catholics, history has an even higher purpose beside. For them, history is the unfolding of God's Will in time, and the attempts of men either to conform themselves to or resist that Will. But American Catholic historians have generally refrained from exploring their own national history with these principles, preferring instead to adopt the analysis of their non-Catholic colleagues, save when looking at purely Catholic topics (and sometimes not then).

It is vital then, for Catholics, especially young Catholics, to have a good and proper understanding of their country's history. To exercise their patriotism, they must work for the conversion of the United States; to do this effectively, they must understand the forces and events which brought forth not only the religion of Americanism and the country itself, but also the sort of Catholicism which, in 300 years, failed so dismally to bring this conversion about.

This book attempts to reinterpret the better known episodes of our history in accordance with the Faith, and to point up lesser-known details which will give factual proof of the truth of this reinterpretation

"The effort to understand history is always guided by the premises about the nature of man. A Marxist, for example, will presume Puritans crossed the ocean chiefly for economic reasons, a libertarian will see political freedom as the motivation, a Muslim, perhaps, would think it but a necessary step in the dissolution of societies that deny Islamic tenets. A secularist will meanwhile claim the pretense of objectivity, in the hope this will better insinuate the presuppositions he seeks to hide, from others or from himself.

Charles Coulombe is a distinguished author of many books on many very interesting subjects; and where relevant, in none of them does he disguise his faith that God created the heavens and the earth, was incarnated at Bethlehem, and from there founded a Church, so that men and women might know and love and serve that Church's Founder in this world, in order to be with Him forever in the one to come. These are of course premises about the nature of man, and if true, they must necessarily contribute mightily to understanding that nature, and of the historical events through which it is expressed. Coulombe's Puritan's Empire may accordingly be as valuable a consideration of American history, as that history has yet produced. "