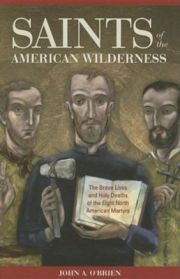 By author: Rev. John A. O'Brien

True tales of horror and holiness

French priests enter a war zone where captured Westerners are paraded before their captors, tortured, and then beheaded. Their desecrated bodies get dumped by the roadside.

No. A place more dangerous: Canada in the 1600s. On rivers and in forests, Iroquois slaughter Huron and Europeans kill for land and power. It’s a landscape of blood and horror whose viciousness eclipses the terrorism that shocks us today. Into this iniquitous land go dozens of stouthearted Jesuits, the purest examples of Roman Catholic virtue our Western continent has ever seen.

Their purpose? To baptize souls and preach the gospel to savages whose degraded, vicious lives cry out for the light of Christ.

Many of these Jesuits were murdered, and today eight of them are saints. Six were priests: Isaac Jogues, Jean de Brébeuf, Gabriel Lalemant, Antoine Daniel, Charles Garnier, and Noël Chabanel; two were lay assistants: René Goupil and Jean Lalande.

They are the Jesuit Martyrs of North America, and this is their story.

From letters these brave men wrote to their superiors by the light of Indian campfires or while skimming lovely waters in swift canoes, John A. O’Brien has crafted the terrifying, inspiring, and true tale of the dangerous struggle they engaged in for enormous stakes: the salvation of countless souls mired in darkness.

O’Brien shows that in the best of times, these good men were surrounded by lasciviousness, pandemonium and demonic rituals. Bad times brought bloody war, upraised tomahawks, the shrieks of victims, and knowledge that their superstitious hosts might turn against them without warning, and bury a tomahawk in their skull.

Patient, charitable, and heedless of their own lives, these eight Jesuits spoke constantly of Jesus, baptized thousands, and — even in the shadow of death — brought them the consoling graces of the Sacraments. Between times they cared for souls dying of smallpox, cleaned festering wounds, and — day in and day out — returned love for hatred, blessings for curses, and prayers for abuse.

Ultimately, all were murdered. Some died from a sudden blow; the rest were mutilated and tortured until, with forgiveness in their hearts and Jesus’ name on their lips, they died in flames their persecutors had set around them.

Saints of the American Wilderness tells of these good men who sought nothing less than the conversion of a continent. Their zeal won for them the imperishable crown of martyrdom and sanctified with their holy blood the soil of North America.

Truly, they are models for those who would be saints in bloody times like ours.