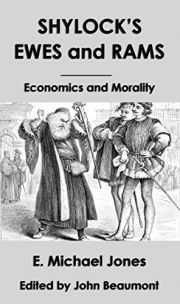 Whenever the state accepts the liceity of usurious contracts, everyone in that state, including the state itself, eventually gets saddled with unrepayable debt. With liquidity gone, the state allows the usurers (and the elected representatives they put in office) to loot labor to pay for the usury burden. E. Michael Jones demonstrates the conflict between usury and labor, and shows how capitalism posits the primacy of usury over human labor as the source of wealth and, therefore, as the most basic principle of the economy. In reality, capitalism is usury at the expense of labor. This inevitably leads to theft and looting, epitomized most notably by the disaster of the Reformation. Dr. Jones also addresses the failure of socialism and communism to remedy the injustices of capitalism. He concludes that in order to conform with the Good, economics must subordinate itself to the moral law. We must return to economics as if God matters.