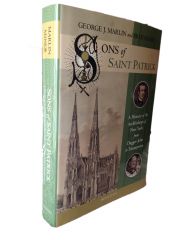 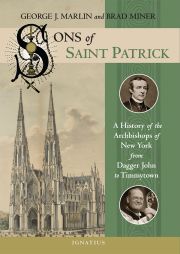 Sons of Saint Patrick: A History of the Archbishops of New York, from Dagger John to Timmytown

By George Marlin and Brad Miner

Sons of Saint Patrick tells the story of America's premiere Catholic see, the archdiocese of New York—from the coming of French Jesuit priests in the seventeenth century to the early years of Cardinal Timothy Dolan. It includes many intriguing facets of the history of Catholicism in New York, including:

The book focuses on the ten archbishops of New York and shows how they became the indispensable partners of governors and presidents, especially during the war-torn twentieth century.  Also discussed are the struggles of the most recent archbishops in the face of demographic changes, financial crises, and clerical sex-abuse cases.

Sons of Saint Patrick is an objective but colorful portrait of ten extraordinary men—men who were saints and sinners, politicians and pastors, and movers and shakers who as much as any other citizens have made New York one of the greatest cities in the world. All ten archbishops have been Irish, either by birth or heritage, but given New York's changing ethnic profile, Cardinal Timothy Dolan may be the last son of Saint Patrick to serve as its archbishop.

"Deeply researched, readable, and engrossing, Sons of Saint Patrick is a towering work of scholarship and an invaluable contribution to the entwined histories of New York City and the Catholic Church. Drawing on unsealed documents and their vast knowledge of local politics and organized religion, authors George J. Marlin and Brad Miner show how the archbishops of Gotham have functioned as 'the leader of the world, or at least of a world', fusing the Lord's work with the often thankless business of combating anti-Catholic sentiment, declining church attendance, and shrinking budgets. Required reading for anyone who cares about the greatest city on earth and the civilizing role played by leading Catholics in its march toward modernity."
— James Rosen, Chief Washington Correspondent for Fox News, and Editor of A Torch Kept Lit: Great Lives of the Twentieth Century by William F. Buckley, Jr.

"Sons of Saint Patrick is a work well researched, informative, and insightful, dotted throughout with welcome anecdotes, as it paints a history of New York's Catholic growth through its ten often-colorful archbishops. I enjoyed the read!"
— Cardinal Edwin F. O'Brien, Grand Master, Order of the Holy Sepulchre

"The Archdiocese of New York has been, and arguably still is, the most influential Catholic institution in the United States. The archbishops of New York are the reason this is so. George Marlin and Brad Miner draw vivid verbal portraits of these ten men who accomplished much for both Church and State."
— Father Gerald E. Murray, Pastor, Holy Family Church, New York and a member of EWTN's "Papal Posse"

George J. Marlin is Chairman of Aid to the Church in Need U.S.A., an agency under the guidance of the pope. A former Executive Director of the Port Authority of New York and New Jersey, he is a contributing editor to the Catholic Thing, an online publication. Marlin is the author or editor of twelve books including The American Catholic Voter: Two Hundred Years of Political Impact and Fighting the Good Fight: A History of the New York Conservative Party. His more than 450 articles have appeared in over two dozen periodicals including the New York Times, the New York Post, the New York Daily News, the Washington Times and National Review. His most recent book is Christian Persecutions in the Middle East: A 21st Century Tragedy.

Brad Miner is Senior Fellow of the Faith & Reason Institute in Washington, D.C., and Senior Editor of the Catholic Thing. He is the author of six books, including The Concise Conservative Encyclopedia and The Compleat Gentleman: The Modern Man's Guide to Chivalry. Mr. Miner is the author of scores of magazine and newspaper articles that have been published in Publishers Weekly, National Review, the Wall Street Journal, Crisis, Newsmax, the University Bookman, and First Things, among others. A number of his recent essays appear in The Catholic Thing: Five Years of a Singular Website, an anthology published in 2013.