HomeSocietyPolitics and SocietyThe Crisis of Civilization
74 of 117 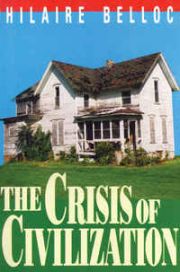 The Crisis Of Civilization. Here the great Belloc shows that ever since the disaster of the Protestant Reformation, Western civilization (which was formed by the Catholic Faith) has been coming apart--since Calvinism opened the door to usury, unbridled competition, the domination of the mind by money, and ultimately the return of slavery. Belloc says our 2 choices are a return to Catholicism or chaos! Essential for anyone who would understand our world today!

"It was the Faith which gradually and indirectly transformed the slave into the serf, and the serf into the free peasant.  . . . You will not be able to set up in a pagan or an heretical or a wholly indifferent society the institutions characteristic of economic freedom; you will not be able to curb competition which alone would be sufficient to destroy such freedom, nor pursue permanently and consecutively anyone part of the program. The thing must be done as a whole, and it can be done as a whole only by the ambient influence of Catholicism."