HomeThe Arts and LettersLiterature and PoetryThe Essential Belloc
33 of 41 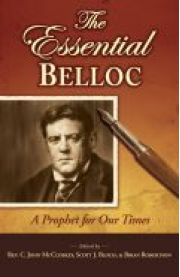 “More than any other man, Hilaire Belloc made the English-speaking Catholic world in which we all live”
-Frank Sheed

He was a poet, a polemicist, and a prose stylist without peer, but Hilaire Belloc (1870-1954) was first and above all a mighty champion of the Catholic faith. With his brave (and sometimes brash) defenses of Catholic civilization, he taught an entire generation of Catholics never to stand for being treated as second-class citizens in the predominantly Protestant Anglosphere.

Today, with the Faith once again suffering scorn and contempt from all sides, it is time to re-discover this Catholic champion.

The Essential Belloc draws upon the prolific writer's works (he authored more than 140 books, plus countless articles, pamphlets, and letters) to provide a comprehensive overview of his ideas, style, and personality. More than just a collection of quotes, these pages offer rich samplings from Belloc's writings, affording you a solid introduction to his thoughts on:

• The foundational link between European culture and the Catholic faith
• The anti-Catholic historical myths that the English-speaking world has come to accept as fact
• The limits—and dangers—of science that has abandoned faith in God
• The latent power and future menace of militant Islam
• The characteristic faults of political and economic systems that deviate from Catholic principles
• The particular charms of places throughout the world: their towns and roads, their churches and inns
• The love of good food, wine, and ale, and the songs of camaraderie that go with them

And more—plus delightful examples of Belloc's poetry and wit.

Belloc himself once remarked that “genius is the ability to think in a very large number of categories.” In The Essential Belloc you will marvel at how well he fits that very definition, and be edified by the breadth of his brilliance—and its continuing relevance for the modern world.