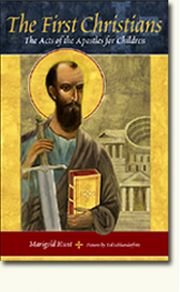 The Acts of the Apostles — for children

Marigold Hunt, author of A Life of Our Lord for Children, here continues the tale of Jesus and His Church by retelling for children the events reported in The Acts of the Apostles, St. Luke’s account of the dangerous early days of the Church.

Focusing on the deeds and experiences of Sts. Peter, Paul, Luke, and Barnabas, author Hunt shows children that the Catholic Church which today seems so ancient and established was born in turbulent times, when merely professing belief in Christ could get you killed — and not by rowdies and brigands, but by public officials carrying out their sworn duty.

Time and again, the apostles wind up in jail (some for years), and time and again God frees them by miracles of one sort or another. With Christian hope and great good cheer, they take up again the task with which Christ charged them just before He ascended into Heaven: “Go forth and teach all nations.”

By foot, on horseback, and on frail craft tossed in stormy seas, they do just that, preaching and teaching their way across much of the known world, winning converts and establishing churches in Palestine, Crete, Cyprus, Malta, Phoenicia, the lands that are now Turkey, and even in Rome itself, the pagan capital of the anti-Christian Empire.

Along the way, the apostles heal the sick, cast out devils, and work other miracles. They face down mobs, evade murder plots, and defend themselves in courts in city after city. In the midst of it all, Peter — whose authority as the first Pope was accepted by all of the apostles — settles disputes that arise among the Christians and between the new Churches.

All this and more is told in The First Christians, the thrilling — and true — saga of the lives and works of the first apostles of Jesus.