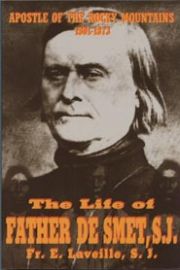 The Life of Father De Smet SJ. What a story! Fr. Pierre De Smet (1801-1873) is mentioned in U.S. history books almost as a footnote, but there was in the mid-19th century America no single person the American Indians trusted as they did this Jesuit Priest. He was "more powerful than an army" at a huge treaty conference of U.S. officials and the Western Indian nations near Laramie in 1851, and he was the chief negotiator at another, with the Sioux, in 1868.