HomeLives of the SaintsThe Life of the Venerable Anne of Jesus, O.C.D.
61 of 68 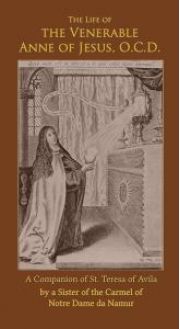 By a Sister of the Carmel of Notre Dame de Namur

While copious references to her can be found in the works of St. Teresa of Avila, scarcely any work has been available on her in English. Anne of Jesus was the foundress of the Discalced Carmelite Reform in France and the Netherlands, and from her foundations there the Teresian reform spread all over Europe, America and eventually England. In many ways, this is the sequel to St. Teresa of Avila’s life.

One of the things that truly stands out about Anne of Jesus is her intense mysticism and love of our Lord, as well as her faithfulness to the original Teresian Constitutions.

This work, written by an anonymous nun in the 1930’s, is based entirely on primary sources, frequently quoting letters to and from Anne of Jesus, not only with St. Teresa, but also Fr. Gracian, the holy French Cardinal Mgsr. Berulle, and many other figures central to the history of Carmel in the 16th and 17th century.