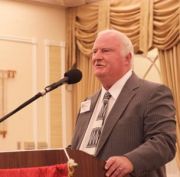 Mr. Kelly acquaints his listeners with one of the more hidden among the Twelve Apostles: James the Less. More correctly translated James the Little. He is called “the brother of the Lord” in St. Paul’s Letter to the Galatians. Mr. Kelly explains both the usage of the term “brother” in sacred scripture and among the Semitic people and, most importantly, how this apostle and his blood brothers, Simon and Jude, were related as kinsmen to the Savior on their father’s Cleophas’ side, who was the brother of St. Joseph. The speaker makes the apostle and martyr come alive out of the pages of holy writ and tradition.