HomeSocietyPolitics and SocietyThe North & the South and Secession
89 of 113 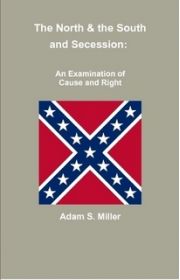 The North & the South and Secession: An Examination of Cause and Right

The first of a four part series by Marian Publications examining the great American conflict of the mid-19th century. A unique examination and presentation from a traditional Catholic historical perspective wherein author Adam Miller examines the cultural, political, and circumstantial causes of what is known as the Civil War, and does so from the Catholic and biblical view of authority. He demonstrates that the idea of the "sovereignty of the people" does not justify the right of secession as most Southerners hold. But a true principle in accord with God's revelation and Natural Law does justify the Southern cause. This book explains what it is. Mr. Miller also addresses numerous questions such as: - Who actually began the aggression? - Who was constitutionally in the right? - Was the war really fought over slavery as most Americans think? - Was it a "Civil War" in the true sense of the term? An eye-opening book that will cause a stir in many quarter.