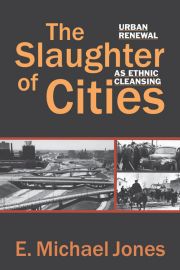 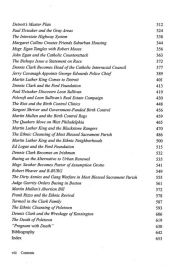 Focusing on Boston, Philadelphia, Detroit, and Chicago, Dr. E. Michael Jones shows that Government sponsored "renewal" of American cities was not a program that failed by going sadly awry, but instead was a planned destruction of the ethnic neighborhoods that made up the human, residential heart of the cities.

"The high-rise 'projects' may have been a dismal failure, it is said, but urban renewal was done with good intentions. Not so, Jones argues in this immense volume ... . Incorporating all the details into his sweeping narrative, Jones makes gripping drama out of urban development. Unfortunately, the epic it recounts is tragic."

"If you want to understand the present and the future, you have to understand the past. This is particularly true of urban problems, which can never be detached from their history. Some provocative new reading in this area is E. Michael Jones' The Slaughter of Cities: Urban Renewal as Ethnic Cleansing."

"This startling claim - that the breakdown of the Church in modern America had its origins in government-directed social policies of the 1930s, 1940s, and 1950s, which originated in the government's propaganda efforts during World War I to control the 'enemy on the home front' (the Catholic ethnics from Poland, Germany, Ireland, Italy, and southeastern Europe) is made by E. Michael Jones in his powerful new work ... . The Slaughter of Cities provides a key to understanding who 'broke' America's cities and why they did so. The book also indicates how the elites used World Wars I and II to 'Americanize' Catholic ethnics, used the crisis of war production to transport millions of poor blacks North for factory work and housed them in Catholic neighborhoods, branded Catholics as racists for resisting this influx, invented and employed sophisticated propaganda tools in the major media to persuade Catholics the suburban life with a car and garage was superior to a close-knit neighborhood, and that public school was superior to the parochial school, and so much more."

"... challenges all who are concerned about the status of modern day America to think more deeply about their ethnic identity, down to the most practical details."

"Jones argues that the established urban neighborhoods did not deteriorate simply because of economic crises or demographic accidents. Rather, from the 1950s on, a combination of misnamed redevelopment programs and malicious social planning turned these areas into war zones, and finally, depopulated deserts. ... He insists that what motivated such experiments as busing and scattered public housing, presented as urban renewal, was at least partly a disdain for urban ethnics ... . Protestant elites and their Jewish liberal allies never hid their contempt for the white ethnics who resisted their plans for thrusting underclass blacks into ethnic Catholic neighborhoods. Nor did the urban reformers whom Jones examines, such as Louis Wirth and the Blanshard brothers, conceal their intention of mainstreaming Catholic immigrants and their descendants, whom they viewed as a threat to their notion of a 'pluralistic America.' ... Jones correctly understands the overshadowing role of ethnic hatred in political life. ... Jones demonstrates that anti-Catholic Protestants have also contributed to this manipulative revolution from above, carried out in the name of fighting 'prejudice.'"

"... Jones is onto something significant. The destruction of the working class, homeowning urban neighborhoods was not just the necessary outcome of economic and demographic changes, but also the result of ill-considered government policies written by urban planners often contemptuous of Catholics and patronizing towards blacks. ... What E. Michael Jones in The Slaughter of Cities understands ... is that the same stubborness that kept the Catholics in cities - and made them so belligerent to blacks who threatened their neighborhoods - was key to rebuilding the cities."

"Jones has described in microcosm some of the policies that led our once-proud centers of American industy to become the dead zones of the Rust Belt. ... Jones has given us a cautionary tale of government attempts to force disparate groups of people to interact and embrace one anohter in our big cities, which breaks down into suspicion and flight."

"Jones documents, from a wide variety of government documents, essays and memoirs, the blood-boiling indictment that a well-defined elite orchestrated federal housing policy to destroy the political base of Polish, Italian, Irish and other ethnic Americans in the major, industrial cities. ... Jones’s substantial and important book ... constitutes a necessary resource in the understanding of how the federal government operates."

"Jones castigates the planning elite and their patrons in Washington as he details the ghastly consequences of federal planning on urban neighborhoods. Jones blames federally coordinated social engineering for creating today’s ghettos. ... Urban renewal efforts in the East and Midwest from the 1930s through the ’60s get an entirely fresh interpretation by Jones. He blames intentional plans that were hardly about civic improvement (an abject failure in that regard) and more about ethnic cleansing. ... This book is a courageous confrontation with ecclesiastical and corporate giants by ordinary citizens and parishioners who found little support except from their pastors. What is happening currently with clustering of suburban and city parishes in the face of shrinking numbers of clergy might be similar. The problem that now rotates around a clergy shortage begs for fresh imagination and solutions."

"The most unjustly unsung observer of America today, as far as I know, is E. Michael Jones, editor of the Catholic monthly Culture Wars (most of which he writes himself) and author of several wonderfully trenchant books. Among the latter are Libido Dominandi: Sexual Liberation and Political Control (2000) and The Slaughter of Cities: Urban Renewal as Ethnic Cleansing (2004), both of which tell the story of the cultural subversion practiced by America's elites, especially such seemingly respectable institutions as the Ford and Rockefeller Foundations. Jones is as profound as he is prolific. He's also versatile, original, combative, and fearless, naming names and drawing blood. If you think of liberals as well-meaning bumblers, guilty of nothing worse than ‘unintended consequences,’ you need to read Jones."

The Slaughter of Cities: Urban Renewal as Ethnic Cleansing by E. Michael Jones is a remarkable history of the application of private foundation and federal housing policies and dollars in Boston, Chicago, Detroit and Philadelphia as a weapon of economic and political warfare from the end of WW II through the 1960’s. … a formidable intellectual accomplishment and well worth reading to understand American history, the roots of housing bubbles and the history of our “financial coup d’etat.”