My cart Cart is empty
Cart is empty
View cart
Checkout
Home/Audio and Video/Downloadable MP3's/The Triumph of the Catholic Cause:... MP3 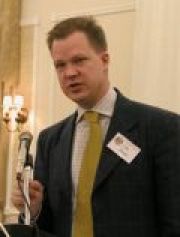 Title: The Triumph of the Catholic Cause: On Trust, Providence, and Action

One of the major points of this compelling talk by Mr. John Sharpe was that for Catholic laymen there is an inherent dignity in fighting for the goods of the temporal order. The Kingship of Christ, he argues, is a temporal kingship as well, not just a heavenly one. He cited as an example the little known fact that the bishop/martyr St. John Fisher, in order to procure a temporal good for his country, petitioned Emperor Charles V, a foreign potentate, to invade his native England and rid it of the scourge that was Henry VIII. Through his publishing company IHS Press, Mr. Sharpe is engaged in promoting the values of an agrarian society. This was strongly emphasized in his exciting presentation, at least as an ideal. To have roots in a certain locale, to walk out and see the same hills and valleys that one's grandparents gazed on, is a natural good that has sadly been completely lost in our mobile, industrialized, global metropolis. It is not the apostolate of the clergy, Sharpe insisted, to put justice and order in the temporal order, but that of the laity. Cited, as examples, were Catholic ministers of state Ludwig Von Windhorst of Germany and Antonio Salazar of Portugal. Both of these excellent Catholic statesmen had to tell their respective popes, Leo XIII and Benedict XV, to basically mind their own business when it came to certain interferences that came from Rome, interferences that overstepped the bounds of the spiritual order. Sharpe goes on to demonstrate how industrialization makes for a mob rather than a ordered society. Mobs need professional outside entertainment because they have no means or time to entertain themselves in the leisure of a family setting. Our speaker hit the nail on the head when he analyzed the whole "bread and circus" industry that the unnatural factory/city environment fashions almost by necessity, while the chains of this slavery constrict the life of joy out of our soul. For his valiant crusade against the war in Iraq, Mr. Sharpe may soon have his own personal experiences to draw from, for he may see his military career end abruptly. His advice to all is that each family, individually, and in common with others who share this awareness, cultivate as much as they can of the agrarian ideal, which is, as he phrased it, the "spirit of the gardener."