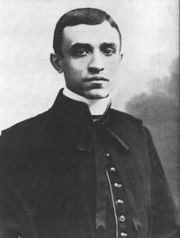 These lectures given by Br. Anthony Mary M.I.C.M. (tert.) contain brief histories of some of the modern pontificates, beginning with that of Pope Leo XIII and ending with a history of the pontificate of Pope John Paul II up to the time the lectures were being given (1993-94). One of the sources used for the course was a book by Mary Ball Martinez, The Undermining of the Catholic Church. Martinez argues that the Church began to be undermined decades before Vatican II. She attributes the work of the undermining primarily to five men all in some way associated with Cardinal Mariano Rampolla.

Rampolla's election to the papacy in 1903 was vetoed by His Imperial Majesty Franz Joseph of Austria-Hungary. Franz Joseph had been informed by Msgr. Ernest Jouin that there was irrefutable evidence that Rampolla was not only a Freemason but also Grand Master of the Ordo Templi Orientalis, an occult society which included Aleister Crowley as one of its most prominent members. These considerations can be discouraging but they are nevertheless important to have some knowledge of. Br. Francis Maluf wisely remarked in one of his meditations on Freemasonry, “We are the Church militant. That means that a war is on. How can a man be a soldier of Jesus Christ if he knows neither the enemy nor the issue.” The veracity of the Church is proved not only by the holy and beautiful lives of the saints but also by the fact that she has survived for 2000 years despite having had wicked members hold even her highest offices.

Examples of the undermining include Benedict XV's order requiring the disbanding of the Sodalitium Pianum, an association dedicated to keeping vigil on expressions of heresy according to the norms set forth by St. Pius X. Pius XI ordered Catholics to abandon another anti-Modernist organization, l'Action Francaise, which had advocated the creation of a Catholic state, preferably monarchist. What Martinez refers to as “the Gasparri Vatican” also betrayed the Cristeros in Mexico and threatened with suspension any priest who administered sacraments to a Catholic who was still bent on resisting Calles' Masonic government.

Throughout these dark times God in His mercy still graced the Church with great lights. Pope St. Pius X reigned from 1903-1914 with the holy and learned Cardinal Merry del Val as his Secretary of State. Pius XI, while he had moments of weakness, nevertheless gifted the Church with Quas Primas, an excellent encyclical on the Kingship of Christ. He also gave us the encyclical Mortalium Animos which very strongly condemns the false “ecumenism” that has been so prevalent over the last 50 years. Pius XII echoed the doctrinal position of the St. Benedict Center when he wrote in Mystici Corporis that “only those are to be considered members of the Church who have been baptized and profess the true faith” and when he condemned those who “reduce to a meaningless formula the necessity of belonging to the true Church in order to gain eternal salvation” in his encyclical Humani Generis. All of this and more is covered in these lectures.