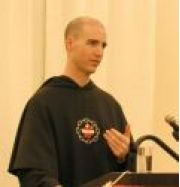 It has become traditional for Brother André to begin the Thursday pre-Conference Open House talks with a general summary of what has transpired at SBC, New Hampshire, over the past year. And there was much to relate. The year before Brother centered his talk on the third of the three principal ways to change someone's mind, through influence. The other two being by way of authority and power. The inspired gospel command, metanoiete ("do penance"), literally means "change your mind." Continuing on that theme, he spoke about the Center's plans to increase the frequency of its communications with friends and supporters on a monthly basis, to vastly amplify and fine tune the website capacity and quality, and to enlarge the Mancipia by four more pages, issue it bi-monthly, and increase its readership. By reaching more people with educational and inspirational Catholic material SBC is fulfilling, with the help of God's grace, its crusade objective to work for the conversion of America.

Brother also gave an overview of the attack on SBC from the Southern Poverty Law Center, which would be further detailed by Lawrence Koralewski in his Sunday talk. One of the ironic things pointed out by Brother was that oftentimes when one is innocently vilified by people or organizations that are themselves truly evil, a person of good will is drawn to look at your work more seriously. In other words, the worse the evil, the greater the good God will draw out of it. So, the chief lesson, Brother explained, that we all ought to learn when unjustly victimized, is not just to defend oneself rightly, but to flavor one's justification with charity.

After commenting on the recent promulgations from Pope Benedict XVI and the Holy Office and counseling his audience to be supportive of all that is good, especially when it issues from the Vicar of Christ, he ended his summation with an evocation to our common vocation, i.e., study. This is why SBC goes through all the labor to have such a Conference, to equip people with the knowledge they must have if they are to be effective lay apostles. Nemo dat quod non habet. (No one can give what he does not have.) It was an inspiring talk, spontaneous and cursive, which made it all the more effective.