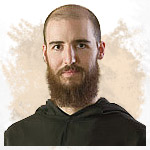 He entered as a postulant for the Slaves of the Immaculate Heart of Mary in May of 1993, and went on to the novitiate on Christmas of that year. He made profession of vows on Epiphany of 1996.

Since 1993, he was mentored in philosophy and theology by Brother Francis Maluf, M.I.C.M., Ph.D., a published philosopher of note.

His apostolic work has included various facets of the publishing apostolate of the congregation. For ten years, he was also part of the community's small "mission band" of brothers who traveled to different cities distributing literature to interested persons in an effort to spread the Catholic Faith and bring wayward Catholics back to a sacramental life. He oversaw that apostolate for four years.

He has edited three of the Order's books, published dozens of articles and presented numerous lectures in apologetics, the history of doctrine, the Church's ecumenical councils, ecclesiology, and devotional topics.

Since 2002, he has been Prior of St. Benedict Center, an apostolate of the Slaves of the Immaculate Heart of Mary in Richmond New Hampshire.