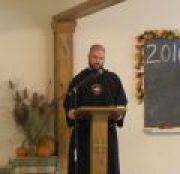 Brother André Maries talk is both an update of all the good news that has recently come the way of Saint Benedict Center, Richmond, including the gift of a resident priest and the conferral of a degree of canonical recognition for the religious congregation in the visible Church, as well as an introduction into the theme of the conference. This short talk is also an excellent survey of the genre of the classical romantic literature that, before it was corrupted in the Renaissance, enhanced Catholic culture and the ideals of chivalry in the Middle Ages. Elevating romance to its highest aspiration, there is divine romance, which is what inspired such seraphic saints as Francis of Assisi and his beloved Lady Poverty.