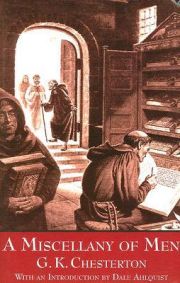 A Miscellany of Men is a collection of essays on sundry topics written by one of the English language's greatest essayists, G. K. Chesterton. In the Miscellany, Chesterton covers all kinds of timely truths and makes prescient and enlightening observations. Covering topics ranging from literature to philosophy, history to social criticism, it is a snapshot of thought on 20th-century Europe (and the world) by one of Europe's sharpest wits and ablest pens. With chapter titles ranging from "The Miser and His Friends" to "The Red Reactionary," from "The Separatist and Sacred Things" to "The New Theologian" and "The Romantic in the Rain," this compact volume includes 39 brief sketches of individuals, each one of whom illustrates an aspect of contemporary society. Social, historical, and religious thought all figure prominently in this book, which deals with a myriad of topics from the sane and healthy perspective of Chesterton's integral, unapologetic Catholic Faith. The book remains particularly unique for its willingness to criticize some of the uncomfortable truths about capitalism while simultaneously condemning inhuman, bureaucratic socialism.

Introduction by Dale Ahlquist, President of the American Chesterton Society.