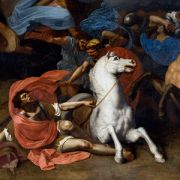 In the early days at Saint Benedict Center Brother, Francis Maluf gave twenty-nine talks to a class on the book of the Acts of the Apostles.

The word “Acts” from the Latin “acta” means “a record,” in this case “a record of the accomplishments” of the Apostles. This “Acta” was written by the Evangelist Saint Luke, who was converted by Saint Paul. Luke was well educated, having been a medical doctor in Syria. He is the only inspired author in the Bible who was a Gentile. Brother Francis explains that Saint Luke received the information for his Gospel and for the first sixteen chapters of Acts from Our Lady and/or the Apostles. In chapter sixteen of Acts Luke begins to use the first person plural, “we,” to relate as a personal co- missionary the activity of Saint Paul in Macedonia, Greece, and Asia Minor. The first part of the “record” of the Apostles deals mainly with the preaching of Saint Peter. Saint Paul (Saul) enters the account in chapter nine, which tells of his astounding conversion, from being a persecutor of the Church to being an Apostle. Chapters nine through twelve continue to revolve around Saint Peter’s ministry, his first mission to the Gentiles, and the council of the Twelve at Jerusalem. From chapters thirteen to twenty-eight are related the four main missionary journeys of Saint Paul, ending with his coming to Rome as a prisoner in the year sixty-three. The climax; of the book is this transference of the capital of God’s kingdom on earth from Jerusalem to the Eternal City of Rome. The Acts open with the account of Our Lord’s ascension into heaven, followed by the descent of the Holy Ghost at Pentecost. For this reason, and for the relation of scores of visions, revelations, and miracles, it is sometimes called the Gospel of the Holy Ghost.

Listen to a preview.