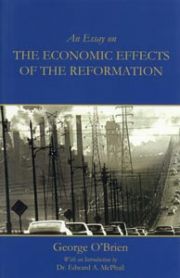 Essay on the Economic Effects of the Reformation is a masterful work of economic history by one of the 20th century's premier economic historians. Dr. O'Brien was for many years professor of Economics at University College Dublin, and he held for a time the Economics Chair. His Magnum Opus, The Economic History of Ireland, won him recognition as one of the greatest scholars ever of Irish economic history. In this work, Dr. O'Brien brings his knowledge of economic thought and history to bear on the difficult problem of the origins of Capitalism and Socialism, examining both of them in light of the historical episode known as the Reformation. His judgment may be shocking, but it is quite Catholic: the growth and development of both Socialism and Capitalism would not have been possible to the extent that it was without the eclipse of the Catholic way of life that followed in the wake of the Reformation. With such a surprising but nevertheless well-argued and persuasive thesis, this book is sure to challenge Catholics and all men of good will to abandon preconceptions taught by the Establishment and come to grips with the facts of economic history. Originally published: London, 1923.

Edward A. McPhail is Assistant Professor of Economics at Dickinson College in Carlisle, PA. He is a student not only of modern economic thought but also of such Catholic thinkers as Belloc, Chesterton, and O'Brien. His interests and research specialties include eugenics and the relationship between economics, ethics, and religion. He is a frequent contributor to numerous journals and societies, including the American Chesterton Society.