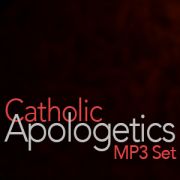 Apologetics is a Greek word compounded from apo and logos, meaning “to give a reason for.”  St. Peter uses it in his first epistle: But sanctify the Lord Christ in your hearts, being ready always to satisfy every one that asketh you a reason (apologian) of that hope which is in you (3:15). Some of the Fathers of the Church called the treatises that they wrote in defense of the Catholic Faith “apologies.”  Brother Francis explains in this course that there is more to apologetics than having enough knowledge to defend the Faith, and that is the art of presentation, which comes from logical thinking. Apologetics is not polemics, the latter art being the employment of authority, such as the Bible, in winning an argument.  As you will see in listening to these lectures apologetics is the art of presenting sound arguments that demonstrate the reasonableness of our holy religion and the goodness of God in revealing Himself to man through the patriarchs and prophets and, finally, through His Son.  Brother confronts the major obstacles, lies, and fallacies that deceive people in our times into thinking that Christianity is unreasonable, or that it is an “opiate” for simple folk who put their hope in a better life to come. Such obstacles as arise from modern science (which attempts to discredit the veracity of the scriptures), from the errors of modern subjectivism, from psychological, social and political trends, as well as from the claims of the false religions in the world today, are all reduced to impotence by the clear and irrefutable logic of Brother Francis’ refutations.

Preview the second class for free: