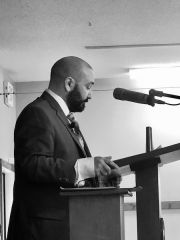 Theme: "The Catholic Church Has the Answer"

Rick Barrett (a.k.a., The Armed Catholic)

Is it true that you cannot be pro-life and have a gun? Or that only those who have the obligation to protect the community have the right to use guns? Mr. Rick Barrett, a.k.a., the Armed Catholic, exposes with clear arguments and passionate conviction the fallacies behind the modern advocates of gun-control. Self-defense is not only a right but a grave duty. Linking the five elements of self-defense (reasonableness, innocence, immanence, avoidance, and proportionality) to the four cardinal virtues, Mr. Barrett makes the water-tight case that the principles of self-defense do not change with the evolution of weapons. That the USCCB has been working hand-in-glove with liberal bureaucrats for decades to deprive law-abiding citizens of their right to bear arms is a fact Mr. Barrett brings forward in his talk, one which should cause concern to Catholics and especially to Catholic men.