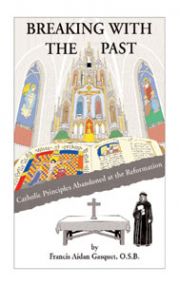 In these days when there is a strong movement afoot without the fold to restore the unity of the Christian Faith, we can indulge the hope that the four lectures of the distinguished abbot will prove fruitful. They are on subjects so vital to unity, i.e., the supremacy of the pope, the sacrifice of the Mass, the eternal priesthood, the universal Church. We pray that these sermons will attract the attention of many outside the Church, and make them meditate on the bitterness of breaking from their "Father's House". May God's holy grace prove stronger than prejudice, as it has so often in the past, and may it soften the hearts which have been hardened by cruel legislation rather than by willful disobedience.