HomeAudio and VideoConference TalksCan an Implicit Faith in Christ Be Sufficient for Salvation? MP3
78 of 552 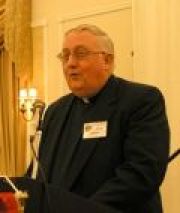 Title: Can an Implicit Faith in Christ Be Sufficient for Salvation?

Having just retired from his position as professor of Theology at the Pontifical University of Puerto Rico, Oblate of Wisdom Father Brian Harrison graced Saint Benedict Center with a five-day visit. That visit was highlighted by this very informative presentation on the necessity of explicit faith in Jesus Christ and His redemption for the beginning of salvation, which is the state of justification, the state of grace. A devoted Thomist, Father Harrison used the teaching of St. Thomas Aquinas to validate his position, which is also that of the Center, on this issue. In illustrating the doctrine as presented in the Summa Theologica of the angelic doctor, our speaker also corrected those theologians who vainly attempt to justify non-believers via the cloak of invincible ignorance by using certain texts from the Summa that address the question of implicit faith. It is almost universally held today, Father argues, that certain non-Christians who follow the natural law can be saved because faith in Christ is implicit in whatever natural religious truths they do believe or whatever natural good acts they do perform. After stating the fallacy, which he considers to be at least proximate heresy, he structures his arguments with great theological precision to build a solid body of refutation. Can a layman follow along and benefit from this presentation? Absolutely. Father is not targeting a class of theologians but a class of ordinary Catholics that need ammunition to defend the infallible doctrine, a doctrine that a child can understand, No salvation outside the Church.

Get this on a CD