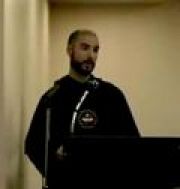 This Catholic America Tour Talk was given on Sunday, October 19, in De Pere, Wisconsin. The subject of the talk is "Toward a Catholic America: History, Goals, and Methods.” Brother André Marie spoke for two hours on the history of the Church in America — good and bad — with particular attention to some of the great apostolic workers who wished to make America Catholic, such as Father Arnold Damen, Archbishop Michael Corrigan, Orestes Brownson, and some local Wisconsin figures: the Dutch Dominican Friar, Father Theodore J. Van den Broek ("the apostle of Wisconsin"), and the Italian Dominican, Venerable Samuel Charles Mazzuchelli.

The talk was given at a chapel overlooking the Fox River, which these and many other missionaries used to travel to and from their missions.