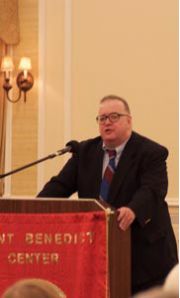 Not only has this speaker an encyclopedic amount of historical knowledge, he knows how to evaluate history such that its lessons can be utilized in the present. In this timely talk, defender of the Faith, C.J. Doyle, surveys the trail of Mohammedan relations and confrontations with Christendom, from the former's rise to power in the seventh century until today. This historian and Catholic lay activist not only presents the facts about the principal assaults upon Christendom by its most visible enemy but the reasons that produced the facts. How, for example, did an ignorant Bedouin convince anyone, never mind millions in his own time, that he was a prophet, and the last of the prophets? How did the pretension endure after his death, assuming that he had some charisma for persuasion? How did it take over eastern Christendom? What condition was eastern Christendom in when the religion of the sword overran huge chunks of its territories, whole Christian nations in fact? How did they take over North Africa, most of Spain, and even southern France before Mohammed was a hundred years dead? Mr. Doyle answers these questions and many more, while recounting the great military victories that saved the West from infidel invasions on two fronts. In doing so he dispels many assumed fallacies, such as that there were Moslem majorities in all Arab countries. Few westerners realize that when the Crusades were first called in 1095, many Arab nations had Christian majorities living under Mohammedan rule. Another mistaken notion is that the Church lost more of its members to the Protestant rebellion than to Islam. Almost fifty percent of Christendom fell to the Mohammedans as compared to less than thirty percent to the Protestants. Our speaker doesn't leave his audience in the past, he takes them into the present with the ongoing jihad to Islamicize Europe, if not by the sword, through procreation. Next time you hear someone bring up the crusades in criticism of the Church give them the facts, or give them a recording of this talk. For our ignorance here we are accountable.