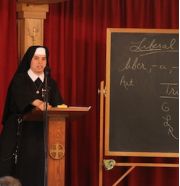 Sister Maria Philomena devoted her talk to a subject that was very important to the integral Catholic education that Brother Francis insisted upon for the restoration of Catholic culture. Philosophy is essential for a Catholic formation of man as man, as an aide, indeed as the handmaid, to theology. In the spirit of Brother Francis, whose lectures she attended for nearly twenty years, Sister took the term “liberal” from the theme of the conference and applied it in the good sense of what it means to have a liberal education and how important it is to “conserve” the liberal arts as an auxiliary to the truths of revelation. As she has loyally done in other talks, she slowly repeated Brother Francis’ simple definition of wisdom and then she related that his definition of liberalism fit the criterion of the wise man seeking perfect knowledge of the most important things: Liberalism in essence holds that man is free to choose any way he wants to achieve salvation.  Sister went on to distinguish between the liberal arts and the fine arts. Man must be educated above all in those things that will make him a better man, not a better bridge builder, which is a skill in the utilitarian order.  Most of Sister’s talk was a survey of Brother Francis’ lectures on Saint Thomas’ De Homine, the study of man as man. Man’s first and highest vocation, especially in its supernatural calling, is to perfect himself as man, informing his mind and strengthening his will. Sister also quotes from Aristotle, Cicero, the great educator Hugh of St. Victor, Dr. John Senior, and other thinkers.

Read the PDF of the handout of this talk.