HomeAudio and VideoConference TalksCreatures Rather Than Mini-gods: War, States, and... MP3
107 of 552 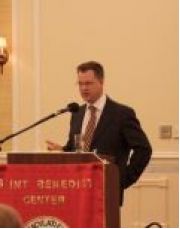 Title: Creatures Rather Than Mini-gods: War, States, and International Relations in a Restored Christendom

He says that under our current government the United States is a combative country. We have not been following the Catholic "Just War Doctrine" (the church's teaching on war). The ideal is not to bomb our neighbors but to convert them. We should approach international affairs with the attitude that a just war is the use of legitimate coercive power to defend our nation's rights and our military power must not be used as an offensive weapon to unjustly force other nations to do our will.