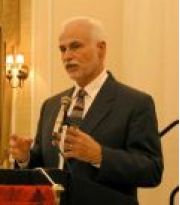 Having been the victim of an orchestrated hate campaign leveled at his travel agency by homosexual agitators, dynamic speaker, Br. Lawrence Mary, knows what it means to suffer persecution. By means of criminal tactics, sexual deviants managed to put him out of business because of a letter he wrote to a national travel news magazine advocating a ban on "gay" tours. Threats poured into his office over the phone and by mail for a full year, making his employees very uneasy. Finally, they jammed his toll-free line, which is crucial for such a business, with a continuous barrage of prank calls. Larry didn't begin his talk with this particular story, but with other familiar accounts as he laid the foundation for how a "good guy," especially a traditional Catholic, should behave when he is treated like a "criminal" for promoting the laws of God. One might call this presentation a militant Catholic's commentary on the eighth beatitude. A friend of Saint Benedict Center for thirty years, Larry reflected on his own conversations with Brother Francis concerning the persecution of Father Feeney and the Center by the liberal hierarchy, and also the external persecution of the Church in America by Protestants and Masons back in the days when the latter took the Catholic Church (and their own aberrations) seriously. After providing more contemporary examples of the persecution of active pro-lifers and active opponents of the "same-sex marriage" phalanx, our speaker brought his audience up to date on the attack upon traditional Catholic groups by the Anti-Defamation League and Southern Poverty Law Center, highlighting the enemy's targeting of Saint Benedict Center in Richmond. However, this talk was anything but a harangue by the victimized against the injustice of it all; rather, it was an exhortation, by someone who still suffers in the trenches, on how to act with nobility, dignity, and charity in the wake of such abuse. It is easy, he stressed, to let oneself be overcome with emotion and react aggressively, even arrogantly, to one's opposition. The speaker also drove home the importance of traditionalists supporting each other in a common defense when under common persecution, instead of focusing on divisive secondary issues. Thus, he concluded, do we manifest the love of Christ within us, from which divine love, Saint Paul insisted, no power or persecution should separate us from. (Rom. 8: 35-39).