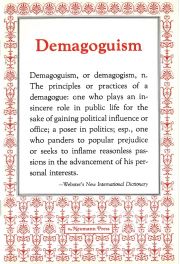 Quote: "It is universally conceded, that republics, especially democracies, can subsist only by means of the virtue and intelligence of the people ; but it does not appear to have been very generally considered, that democra­cies, or popular forms of government, which, through suffrage and eligibility, admit the great mass of the population to a share in the administration, have a strong tendency to counteract the very virtues on which their permanence and utility depend.

Our political history, we think, demonstrates this latter position, beyond the reach of cavil or doubt, to all who have accustomed themselves to look a little below the surface of things. Here, in this matter, the boasted maxim of political economy, that demand creates a supply, does not hold good. Looking at what we were in the beginning, and at what we now are, it may well be doubted, whether another country in Chris­tendom has so rapidly declined as we have, in the stern and rigid virtues, in the high-toned and manly principles of conduct, essential to the stability and wise adminis­tration of popular government."