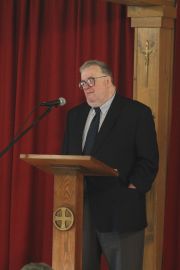 Our final speaker was C.J. Doyle. His presentation, “Developing a Counterrevolutionary Perspective,” perfectly completed what could be called a symposium rather than a conference. Amazingly, even though the theme lent itself to what could have been repetious accounts of the historical battles of the Church against the “Revolution,” C.J.’s approach was fresh and vintage Joe Doyle. His knowledge of gravely consequential historical events, past and current, ecclesial and secular, is encyclopedic. One thing Joe said that all the speakers said in one way or another is that a Catholic is a Counterrevolutionary “by necessity.” After speaking of what Brother Francis called the “three 17s,” 1517, 1717, and 1917, that is, the beginning of the Protestant revolution, the founding of revolutionary Freemasonry (that is the Grand Lodge in England), and the Communist revolution in Russia, Joe spoke about Hilaire Belloc and his prophecy of the coming New Paganism, which Belloc expounded upon in an essay on the subject, saying that it  would be openly satanic as compared to the idolatrous old paganism that at least had some moral principles and standards of virtue. Mr. Doyle praised the pro-life movement, but noted its shortcomings in that the efforts were more political than supernatural. Much was said, too, of the hierarchical opposition to the salvation dogma and the fear of many shepherds, especially in America, of being called “bigots.” The talk ended on a note of optimism in that liberals in the Church were now a dying breed, and the younger clergy much more attuned to the traditional Church they never knew.