My cart Cart is empty
Cart is empty
View cart
Checkout
Home/Holy Scripture/Divine Parables Explained: or The Church of the Parables 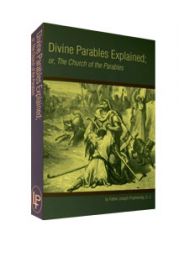 Never have you heard the parables of Our Lord explained like this learned American Jesuit did in 1890 when this work was first published. Here, in his own words from the introduction, is the author’s reason for publishing this magnificent work:
The bible tells us it was given to the Apostles to know the mysteries of the kingdom of heaven either in parables or plain words. If that was so (and who will doubt it?), who has it now? And to whom is it given, if not to their legitimate successors, who were to continue the work which the Apostles had begun, even to the consummation of ages?
If, then, the kind reader of these pages finds in them a more accurate, faithful, and thorough explanation of our Lord’s parables than he ever received from any sectarian preacher, let him bear in mind that the bishops and priests of the Catholic Church are the legitimate and only true successors of those to whom the Savior said: “To you it is given to know the mysteries of the kingdom of heaven, but to them it is not given.”
I have selected for exposition only those of the parables that relate to Catholic dogmas controverted by the sects, and I pass over those which contain only lessons of morality never impugned or denied by any one bearing the name of Christian, at least in theory.