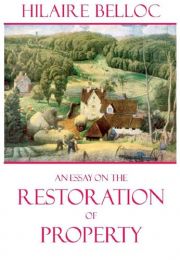 Belloc's most famous Distributist tract, being a clear, concise, and straightforward sketch of how a society of real property owners might be re-established and defended. Just what is "distributism," and why should Catholics be interested in such "worldly" things as money and who owns it? Distributism is the belief that, in order to provide economic independence and protection for families (the basic unit of society), property should be as widely distributed as possible. (The majority of the property should be owned by the majority of the people.) Further, this protection should be fostered by the nation's laws. Catholics should be interested in this topic because distributist economic policies would create a better atmosphere for the social reign of Jesus Christ the King in nations. (Remember, Communism, one of "Russia's errors," is largely an economic heresy.)