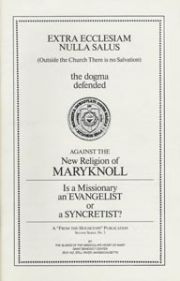 Extra Ecclesiam Nulla Salus the dogma defended against the new religion of Maryknoll.

By The Slaves of the Immaculate Heart of Mary

This is a powerfully written critique of Maryknoll magazine, in particular an article therein by Philip Scharper, a lay “theologian” and huge proponent of religious syncretism. The article was titled “The Hidden Faces of God” and it appeared in the March 1985 issue of that widely circulated organ for Marxist liberation theology.  The long title spells out the issue: Extra Ecclesiam Nulla Salus: the dogma defended against the New Religion of Maryknoll with the subtitle, Is a Missionary an Evangelist or a Syncretist?

Scharper hates the salvation doctrine (as is evident in his screed), but there would be no such doctrine without the Church.  The fact that the Catholic Church taught this doctrine, or even tolerated it, makes the liberal “theologian’s” blood boil.  He blames St. Augustine for being the doctrine’s major advocate.  Then he cites “Cardinal” Ratzinger as a more enlightened, current theologian who sweeps away all that triumphalistic, narrow-mindedness of the past.

Part of the reason for writing this forty page critique was to defend our present Holy Father who, when he wrote the words Scharper quotes, was still just a young priest. His maturer thinking on the subject was far more respectful of the solemn magisterium, which cannot err in its supreme teaching office. Little did we know, in 1985, that Cardinal Ratzinger would one day be pope.

The main reason, however, for publishing this spirited rebuttal was to demonstrate that “No Salvation Outside the Church” has always been the Church’s fundamental doctrine, and that, so foundational is it, that without it, the Church would have crumbled long ago. Although the issue then at hand, rebutting Scharper, is history, the relevance of this lucidly written exposition is more timely than ever.