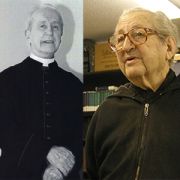 Here we have a recording of a long interview that Father Malachi Martin conducted with Brother Francis. It was recorded on May 4, 1992, by a friend, Pat Romano. Father Martin gave the interview here at the monastery in Richmond. The questions are given by Father Martin and they open the door for Brother Francis to give a personal history of the Crusade as he lived it with Father Feeney. There is a lot of information in this interview that never appeared in Loyolas and Cabots or Gary Potter's After the Boston Heresy Case. Father Martin died in 1999, just seven years after the interview. Father Malachi Martin was a prolific and very well known writer. He authored seventeen books of fiction and non-fiction. At the time of the interview Father Malachi was interested in writing a book on Father Leonard Feeney, so, as one can see by the questions, they were geared to that purpose. The book, unfortunately, was never written.