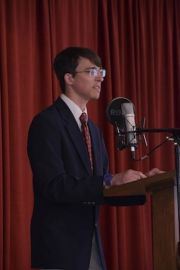 Fatima: Our Lady’s Reply to the 20th Century Secularist Utopia. Also making his debut as a speaker was Martin Chouinard, a teacher at our high school and graduate of Saint Thomas More College in Merrimack, New Hampshire. The first part of Mr. Chouinard’s presentation was a tracing of the history of secular utopianism, which reached its height in the 20th century. He familiarized his listeners with the convert, Monsignor Robert Hugh Benson, son of an Anglican Archbishop, and author of the best-selling, utopian fiction Lord of the World. With great lucidity our speaker interpreted the actual rise of the last century’s militant superpowers and their use and abuse of language (Woodrow Wilson’s making “the world safe for democracy,” for example) and international finance in the light of the prophetic “dystopianism” laid out in Benson’s novel. Julian Felsenberg, the book’s demagogic protagonist, is a figure of many tyrants that would follow soon after the book was published in 1907, and, in fact, of the anti-christ himself. Orwell’s 1984 and Huxley’s Brave New World, offered similar themes and were equally lucrative for publishers. Our speaker did a great job highlighting the horror of WWI and II, pointing out that Wilson considered his presidency messianic. Other types of revolutions are singled out in this overview, in thinking and science, such as Francis Bacon’s paradise of technology envisioned in his book, New Atlantis. And, finally, we have Karl Marx. Mr. Chouinard notes with acute punctuations how the visionaries of this world, having divorced themselves from God, have generated nothing but death. In science, man has progressed from the slingshot to the atomic bomb. In the second part of his presentation, Mr. Chouinard rallies the troops with the banner of Mary, our last hope, the antidote to misery and death. Our utopia is, indeed, in heaven. But, here on earth. amidst whatever trials, our speaker gives us the hope that is the message of Fatima. Mary is that “good place” that is the true utopia (literally “no place”’ in Greek) that Thomas More’s book satirizes. Heaven, hell, sin, war as chastisement, and Our Lady’s sadness most effected the three shepherds of Portugal. In conclusion, our speaker bids all to love sacrifice; it consoles the Sacred and Immaculate Hearts. And to have hope! We know the victory is ours if we live the life of grace.