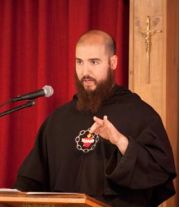 Taking the theme of his talk from the Rule of Saint Augustine, which ends with the doctor’s exhortation that the brothers observe the rule “not like slaves under the law, but like freemen established under grace,” Brother André first establishes a foundation for the freedom of the will as a power inherent in man. The act of the will is in the choosing (or not choosing) of some good. Elevated by supernatural grace, these acts of the will, still in need of the prompting of actual grace, are meritorious unto eternal life. With supporting quotes from scripture, Saint Augustine, and other doctors, Brother clarifies the true meaning of freedom as it is exercised by the will and then, from there, he builds the corresponding new man of virtue perfected in grace, free of sin and death and self through his union with Christ.