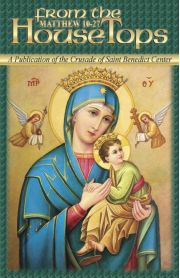 From the Housetops is a Catholic Quarterly journal featuring well-written, informative articles on important subjects: authentic Lives of the Saints, militant Apologetics, un-revised Church History, non-ecumenical Marian studies, sound dogma, and general Catholic erudition. The magazine is edited by the Religious Brothers and Sisters of the Slaves of the Immaculate Heart of Mary, a traditionalist missionary congregation. Contributors to the magazine include veteran journalists such as Gary Potter.