HomeDoctrineApologeticsHeroes & Heretics of the Reformation
8 of 17 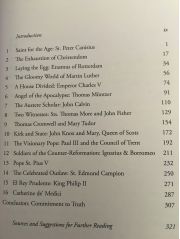 Not since the birth of Christ has an event shaken the foundations of the Western world like the Reformation. Now, 500 years after Luther nailed his ninety-five theses to the door at Wittenberg—the sound of which served as the thunder presaging the storm to come—Phillip Campbell, author of The Story of Civilization, casts fresh eyes on that tumultuous time and its most influential characters.

It was a tumultuous time, filled with heroes, heretics, and some who were a little bit of both. It was a time of destruction and rebuilding. Some sincerely sought reform while others sought merely to profit by it, and some—perhaps too few—used the events of the time to become saints.

In these pages meet as you’ve never met before:

• Martin Luther: the tortured Augustinian monk whose act at Wittenberg called forth the storm
• Thomas Müntzer: the radical who, inspired by the new way of thinking and his own apocalyptic views, sought to use the sword to usher in the reign of God; he would feel the sting of Luther’s words and the bite of the executioner’s blade.
• The queens: Mary and Elizabeth Tudor, who were at different times bastardized and delegitimized by their father Henry VIII, but who each reigned during this period of upheaval. One is known to history by a derogatory epithet, while the other, “bloodier” still, has an epoch named in her honor.
• The popes: Paul III and Pius V, each of whom sought to save what could be saved of Christendom, one through the calling of the Council of Trent, which codified an authentic Catholic Reform, and the other through the calling of a new crusade to fend off the ever-threatening Turks.
• St. Peter Canisius: who lived a life of sanctity as he tried to reconcile those who had drifted away back to the Church.

Through the lives of those above and others, dramatically unfolded in Campbell’s stirring narrative, learn how the heroes and heretics of the tumultuous sixteenth century shook the world, for better or for worse.