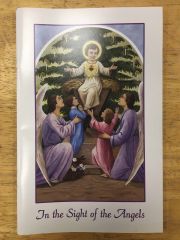 By Slaves of the Immaculate Heart of Mary.

The creation of the angels, the battle in heaven, fall of the devils, the nine choirs of angels, the duties of the guardian angels, our debt to the angels. Taken mostly from the writings of Saint Augustine, Saint Thomas Aquinas, Saint Bernard, and others. References pertaining to the angels from both Old and New Testaments. There is a short section on Saint Michael, Saint Gabriel, Saint Raphael. Examples of angel stories from the lives of several saints. Also relates the story of the Angel of Peace at Fatima. Includes prayers of the Church and devotions to the angels.