HomeAudio and VideoConference TalksKingship and Sacrament: What the Coronation Rites Tell Us
175 of 552 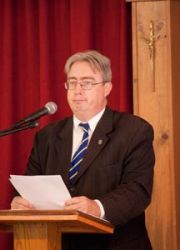 Title:  Kingship and Sacrament: What the Coronation Rites Tell Us

Mr. Coulombe, MC of the conference, spoke about the Church and state as united authorities in the ages of Faith, ideally legislated in the liturgical rite of a Catholic king’s coronation. Peppered with lively and witty commentary, this was a fascinating presentation of the rite as given in the “bishop’s book,” the Roman Pontificale. Harkening back to the prophet Samuel’s anointing of Saul as the first King of Israel, the Metropolitan archbishop would anoint the king in a ritual that was highly sacramental, though short of being an eighth sacrament. Originally, the king would be donned in military uniform, but later he wore liturgical vestments. Before the actual crowning, the metropolitan would require the royal candidate to promise his piety to God, by whose power he would reign, keep and defend the Catholic Faith, honor the liberty of the Church, rule over all with justice, punish malefactors, and defend the poor, the weak, and widows. Then came a stern warning that the king’s own salvation would depend on how well he fulfilled his duties, not to some, but to all of his subjects. Coulombe prefaced the theme of his talk with a summary of the ongoing victories of the secular, anti-Christian state, from the French Revolution until today. He expresses in this preface his own historian’s theory of Vatican II.