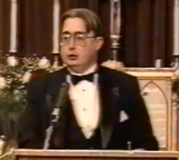 Theme: Honoring the Feast of Christ The King

A prolific, talented author himself, who has studied the writings of Fr. Leonard Feeney, Mr. Charles Coulombe shows the significance of Father's contributions during the time of a great Catholic literary revival in the English speaking world. Mr. Coulombe looks at Father Feeney's history and background and what that meant to him as an author. His individuality and rare whimsical quality distinguished Father's writings from others in both poetry and prose. Poetry at its highest degree can be prophetic and a prophet of the times was what Fr. Feeney was. He went from being one of the leading lights of Catholic literature, perhaps the greatest that the Church has produced in the 20th century, to being ostracized and an outcast because of his defense of truth. Truly, a great loss was suffered to literature which was Father’s means of finding and expressing the truth through the lens of the written word; his theology colors all his other works.. Mr. Coulombe lays before us, in the example of Fr. Feeney, an important lesson in what our efforts for defending the truth, especially the Dogma of Faith, will merit us.