HomeAudio and VideoConference Talks2013Liberalism: The Modern Phase of Odium Fidei
12 of 32 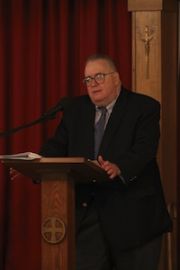 C.J. Doyle provided an exhaustive historical chronology of the different episodes of persecution against the Church, both in Christendom and in America. Beginning with Brother Francis’ three symmetrical dates in the modern phase of liberalism and its odium fidei (hatred of the faith), 1517 (Luther’s protest against the Church), 1717 (birth of the modern masonically-inspired revolutions against altar and throne), and 1917 (the Communist takeover of Russia), Mr. Doyle showed how liberalism has always aimed its guns at Catholicism wherever it gained domination. In each case, whether it be in America, France, England, Russia, or in the Church itself, liberals have inevitably shown their true colors in doing the work of Satan. The shedding of the blood of martyrs almost always followed the advent of liberalism, especially in its later phases. Mr. Doyle cited Pius XI’s condemnation of communism in Quadragesimo Anno, wherein the Pope said that Socialism is the child of liberalism and its heir is Bolshevism.  Mr. Doyle was masterful is providing the causes of why liberalism triumphs, citing love of money and the indifference that comes with attachment to comfort as major factors.

Available as MP3 and MP4