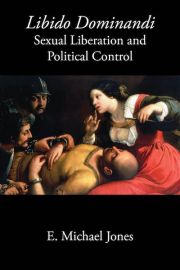 Man has as many masters as vices, defects and weaknesses. Todays governments and corporations are actively working to enslave man, using his own vices.

The only question remaining is whether this enslavement can be used to gain financial and political benefits from it, and if so, how can this be achieved?

The best method of controlling people is one that achieves its goals, leaving them completely unaware that they are subject to control, and the best way to do this is to systematically manipulate their desires, for man identifies with them. Defending them, he defends his "freedom", which he usually understands as an unlimited potency to satisfy his own desires, not understanding most often that it is extremely easy to manipulate them from the outside. This manipulation today serves the dark forces to improve the financial system and political supervision and exploitation.

This book, describing a coherent construction of a worldview based on this phenomenon, explains how sexual liberation has become a form of political control.