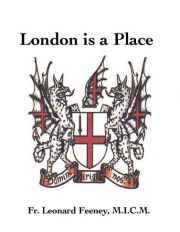 Vintage Father Feeney. Written in 1951, after founding the Order of the Slaves of the Immaculate Heart of Mary (but before the author's unjust "excommunication"), London is a Place offered the English-speaking world a fresh look at a literary genius with uncanny resilience. Although everything Father wrote drew inspiration from his love of the Faith and Catholic culture, this book is especially revealing of his priestly heart.

London Is a Place is a masterful commentary about a "place" where the author studied for several years. Father Feeney had exceptionally keen and penetrating powers of observation, all of which went into the writing of this book. The reason that he gave himself to this work was to demonstrate to American Catholics that he was the same delightful Leonard Feeney whom they knew and once cherished. Unlike Fish on Friday, which the author wrote as a fairly young Jesuit, this is a book of chapters filled with fascinating and sometimes critical insights, rather than splendid essays. Ample and hilarious anecdotes, barbs for those who deserved to be barbed, praise for the praiseworthy, history, philosophy, and commentary on almost anything about everything that a genuine priest of God would find worth sharing with his readers, make up the matter for these pages. Take chapter VI's "Child In the London Streets"; only a priest who relished his own childhood and who cherishes the honor of being called "Father" could have written with such paternal affection about the waifs of London's murky back streets. Underneath all the brilliant prose, and succinctly threaded throughout as a challenge to be discerned by the discerning, was a call for England to justify her pretentious "greatness" by returning to the Catholic Faith. Or, from the left and contrariwise, as some of those high-churched sophists scorched in chapter eight "London Preachers" would rather have it, winning the Church back to England. Each of the eight chapters flow with a sense of purpose to a ending that would have been abrupt were his choice for a closing caricature anyone less than the great preacher Father Bernard Vaughn. Father Feeney saved the best for last.

This ebook comes in epub and mobi formats.

Choose the mobi file for kindle devices and the epub file for other devices.