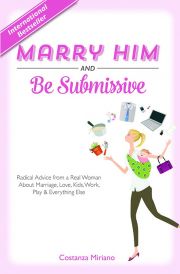 ARE WE REALLY CALLED TO BE SUBMISSIVE?

Wives, be submissive? Really? Well, yeah…and here’s why it will lead to a more fulfilling marriage and life!

In Marry Him and Be Submissive, Costanza Miriano dishes on all the hurdles and difficulties that real women face in dating, marriage, and motherhood. In a series of letters to her closest friends, Miriano offers sage, frank, and hilarious advice on:

• Whether to keep waiting to get married (No! Dive in! You’ll never be 100% “ready.”)
• How to stop worrying about all the cushy “first world problems” and embrace the true joys of family life (even if it means cutting back on Facebook a little)
• What it means—really means—when your husband doesn’t seem to be listening (he’s probably thinking about soccer, but he still loves you)
• How to maintain your life after pregnancy (you can’t! It’s over! But your new life will be so much better)
• How to get through the day after you realize your kids went out with dirty underwear, or worse, no underwear (hint: wine helps)

Miriano boldly, playfully, and profoundly takes the lives and loves of modern women head on, and shows how true marital happiness and holiness is found in submission. And she shows how submission—real, true submission, which is about love, humility, and support—will lead you to salvation. Far from belittling women, it empowers them (and their families) in ways that secular feminism can only dream of.

Costanza Miriano is a wife and mother of four children ranging from 7 to 14 years old.

She works as a journalist for Rai (Italian public television), is a freelance writer on education and relationships, and has worked with the Pontifical Council for the Laity.

She has a blog that has had more than three million readers in two years, and has written four books, including Marry Him and Be Submissive and Marry Her and Die for Her (forthcoming from TAN Books) which have sold around 70,000 copies in Italy and have been translated into Spanish, French, Portuguese, Polish Slovenian, and now English.